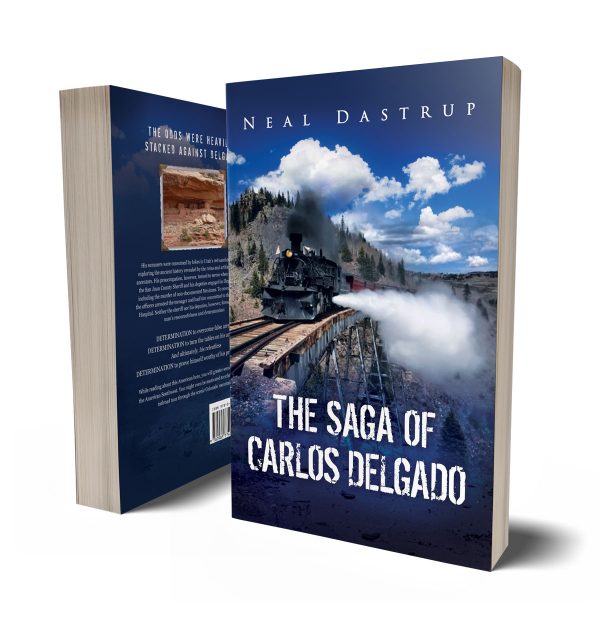 The Saga of Carlos Delgado

THE ODDS WERE HEAVILY STACKED AGAINST DELGADO

His summers were consumed by hikes in Utah’s red sandstone desert, exploring the ancient history revealed by the ruins and artifacts left by his ancestors. His preoccupation, however, turned to terror when he discovered the San Juan County Sheriff and his deputies engaged in illegal activities, including the murder of non-documented Mexicans. To cover their tracks, the officers arrested the teenager and had him committed to the State Mental Hospital. Neither the sheriff nor his deputies, however, foresaw the young man’s resourcefulness and determination:

Read the first few chapters below.

Splotches of wet blood splattered in a frenzied pattern on the walls of the small, dreary ante room next to Admittance. In a wild panic, Carlos Tomás Delgado gained the advantage on Charlie Cullen, the larger man in the fight. Holding him with one hand, he grabbed a small wooden chair with his free hand and bludgeoned the therapist with several blows.

After Cullen was beaten to unconsciousness, Delgado bolted clear and crashed backward through the inner door, breaking it off its hinges. Fueled by a rush of adrenaline, he raced wildly out of the room and sprinted toward freedom through a nearby exit.

Sprawled comatose on the floor, Charlie Cullen’s head was covered with blood. He was a new addition to the staff and this was his first week to work the swing shift, in addition to his regular duties. As such, he was in charge of admitting new patients. His first were two teenagers who had recently arrived from San Juan County.

Rosario “Rosy” Yazzie, was a beautiful fifteen-year old Native American with a file that stated that she had a history of drug abuse and suicide attempts. She was scheduled to be admitted first and Delgado’s matriculation was to follow. Now, Rosy was lying in a crumpled heap beneath the therapist, bruised and unconscious. Her injuries, including multiple bite marks on her back and both arms, were so extensive that she appeared more dead than alive.

Carlos was a year older and the early maturing Mexican had a men- acing look. He stood six feet tall, weighed one hundred eighty pounds and was all muscle and sinew, with no trace of body fat.

Lightning struck above Carlos as he dashed from spot to spot through the early evening dusk that was forming in the foothills. It was a challenge for him to navigate such unknown terrain during the increasing twilight shadows. The front of an epic summer storm was commencing, bringing increased wind in the midst of periodic thun- der and lightning. Laboring to distance himself from the flickering houselights that had started to appear in the town below, he scrambled recklessly past the asylum’s iconic amphitheater to reach the base of a nearby mountain.

If Carlos could escape the authorities, he knew he was capable of survival in the back country. His young life had been spent wandering in and out of the red sandstone desert surrounding Montezuma Creek in southeastern Utah and his active outdoor life had hardened him. Officially, he was now a fugitive and was running for his life. This was much more than a wilderness survival exercise.

Snapping sounds from fragmenting branches reverberated as he dashed through thick clumps of scrub oak. The noise was magnified by rolling thunder from the low, dark clouds that continued to form overhead. To add to the chaos, wailing sirens began to pierce the air below. Flashing red lights from first responders who sped eastward along Center Street toward the asylum produced noise and excitement that further escalated his amped up panic.

Upon arrival at the facility earlier in the day, Carlos had glanced at the mountain, but he had not perceived that the vertical terrain was so steep and treacherous. Running frantically, he reached an open field and then tumbled out of control over a barbed wire fence. After gathering himself and redirecting his course, he ascended upward from the base of the enormous mountain. Not daring to slow his pace after passing through the open pasture, he was repeatedly accosted by thick, low hanging scrub oak branches. These encounters carved new flesh wounds on his bare arms and head, creating small red streams of pulsating blood. The flow soaked red blotches onto his grungy under- shirt, worn out jeans and hand-me-down buckskin boots. In every way, Carlos Tomás Delgado looked the part of a desperate criminal fleeing from the long arm of the law.

“Stand back! NOW! Everyone get back!” Police Chief Craig Palmitier shouted at the growing horde of onlookers. “Officers and medics need to get through.”

The crowd eased backward, but no one was in a hurry to give up their front row position. The scene was chaotic, surreal and smacked of officer overkill. There were sirens screaming and red lights glaring from every first responder in the city. After two black and whites screeched to a halt at the curb, the Red Cross ambulance arrived and the city fire truck was not far behind. “Who’s minding the store?” one onlooker snickered to another. “This would be a good time to rob the bank.” His listener nodded in agreement.

An officer stretched a yellow tape line from a corner fence post to a stake he had driven into the lawn. He extended the tape along the side- walk, around a large poplar tree and then to the front entrance of the State Mental Hospital. While he was busy fencing out bystanders, another lawman ushered in the medical team. Since there was not a fire, the firemen held their position and watched the action from the fire truck. “Someone lift this man onto a stretcher,” Chief Palmitier commanded the medics when they entered the room. “Don’t touch anything else! We’ll do a full investigation and I don’t want any evidence contami- nated. Send for a second gurney to carry the girl.”

The medics and Palmitier worked together to roll Cullen out of his fetal position and onto the stretcher. He was regaining consciousness, but remained immobile.

“New inmate …” he finally mumbled. “When I got to Admittance … noise in the side room … went in. Found him raping her. All hell broke loose. He’s … a savage!”

“Easy does it,” Palmitier cautioned while they transferred Cullen onto the stretcher. “Where is he?”

“Escaped. Ran toward … mountain.” He tried to gesture upward.

“Get the search lights!” Palmitier ordered a nearby cop. “Fast! And put cars on all perimeter roads.”

Then he asked the bleeding and bruised therapist, “can you give me a description? What was he wearing? How big is he? Things like that.”

The therapist grimaced. “Big. Mexican or Indian. Muscled up. Hair clear down his back. Smelly. Bet he hasn’t showered all summer. Wife- beater shirt, grungy. Filthy blue jeans. Holes in both knees. Worn-out boots with fringes. Indian-style. Buckskin. Up to his knees. Name is Carlos somethin’. Mexican. File is over there.”

Cullen motioned toward two manila folders that were scattered on the floor in the corner of the room. Both folders had paperwork spilling out of them into a disheveled pile.

“One file his. Other is the girls,” he managed.

While Palmitier interrogated Charlie Cullen, the medics worked frantically on the seemingly lifeless body of Rosy.

“She’s still alive,” one said to the other, “but barely. Stop the bleeding on her neck and I’ll do the CPR. We’ll doctor the smaller gashes on her arms and back later.”

When summoned, two firemen appeared in the room to assist the medics who were hauling Cullen outside to the ambulance. As they exited, the medic who remained inside yelled “put him on the lawn. The girl is critical. She needs to be rushed to the ER right now!”

After rolling Cullen off the stretcher and onto the lawn, the gurney was returned to the small room to be used to carry the girl. A fireman was sent to obtain a second gurney for Cullen.

Working swiftly, the men loaded the unconscious, viciously bat- tered female. When she was secured on the gurney, they briskly carried her to a waiting ambulance. Once loaded in the vehicle, both medics continued their life saving efforts.

“There isn’t much time. Get her to the ER fast,” a medic shouted to the driver. “STAT!”

“Got it!” he responded, shifting the four-speed into reverse to back away from the congested throng of people around them. Then he turned on the siren and lurched forward, causing the crowd to disperse. In haste, the ambulance proceeded toward the hospital.

Inside the State Mental admittance room, Chief Palmitier further instructed his officers before dispatching them to strategic points north and south of the asylum.

“Catch that SOB! He needs to be in cuffs before something worse happens. Every one of you get out there and go find him!”

I hope you enjoyed reading the first two chapters of The Saga of Carlos Delgado. To continue reading please purchase the book.