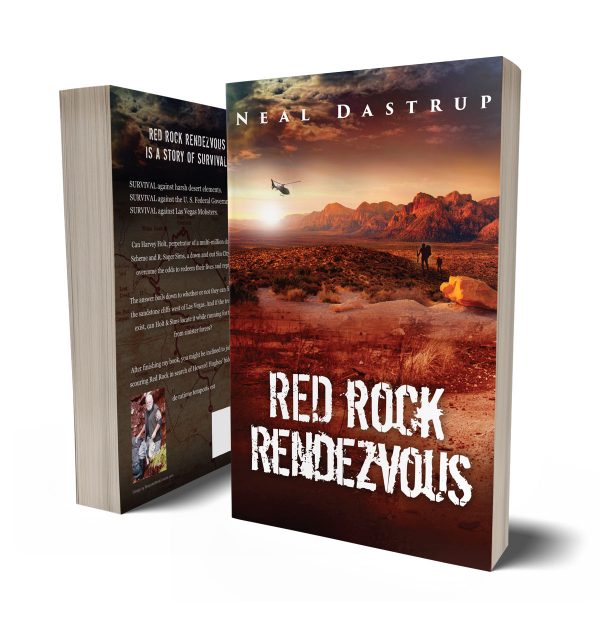 RED ROCK RENDEZVOUS IS A STORY OF SURVIVAL.

Can Harvey Holt, perpetrator of a multi-million dollar Ponzi Scheme and R. Sager Sims, a down and out Sin City attorney, overcome the odds to redeem their lives and reputation?

The answer boils down to whether or not they can find silver in the sandstone cliffs west of Las Vegas. And if the treasure does exist, can Holt & Sims locate it while running for their lives from sinister forces?

Read the first few chapters below.

Harvey and I limped painfully down the embankment toward a dry creek bed. Together, we staggered through the roughstrewn rocks until reaching the bottom of a small, winding canyon. We were tired and weak and our faces had the drawn down expression that comes from a painfully endured hardship.

Even though we were burdened with heavy contents inside our backpacks, I persisted in dragging my dusty, well-worn bedroll, just in case it got cold. Although our ammunition was spent, both of us held tightly to our rifles. We walked in stooped postures, with our eyes glued to the ground.

“Wish I had the cartridges we left at Calico.” Harvey’s voice was dreary and he seemed expressionless as he spoke. He was unusually quiet and seemed to shuffle along without any enthusiasm. I did not reply as I limped downward into a muddy quagmire that had formed between some large sandstone rocks.”

Harvey followed closely at my heels, stepping on stones wherever they were available, in order to keep his boots dry. Upon arrival at the bog, neither of us removed our foot gear, even though the mud would have salved our blistered feet. Trudging wearily through the muck, I accidentally slipped on a smooth boulder and nearly fell, but recovered by exerting a determined effort. Feeling dizzy and faint, I put out my free hand as I reeled to the side. Finally steadying myself, I again stepped forward, but awkwardly slipped and reeled again. Once more, I nearly fell. This time, however, I uttered a sharp exclamation of pain, grimaced and stared back at Harvey. Inexplicably, he refused to look at me.
Standing exhausted in a state of shock, I debated what to do. Finally, I shouted “for hell sake, Harvey, I might have broken my ankle.”

Harvey staggered on through the bog. He did not pause to look back after passing me and I could only glare at him as he lumbered on. Even though my face was deadpan, my eyes focused on him like the eyes of a starving coyote sizing up his prey.

Harvey shuffled up the incline on the opposite bank and continued straight ahead, still without taking as much as a moment to look over his shoulder. I stood helplessly in the mud watching him. My right hand began to tremble and it was clear I was agitated.

Even though my mouth was bone dry, I tried in vain to moisten my parched upper lip with my tongue. My effort was in vain because Harvey had possession of the canteen.

“Harvey!” My supplication echoed like a pleading cry from a wounded man in distress. His head still did not turn. I watched him go as I jerked grotesquely, lurching forward with a faltering gait, wanting desperately to follow him up the slope toward the small plateau above the low lying hill. Immobilized, however, I could only watch while he passed over the crest and disappeared.

I turned my solemn gaze and slowly surveyed the landscape that now belonged to me alone. Harvey was gone.

The sun smoldered on the horizon and gave off a vapor mist that culminated in a pink and purple sunset, iridescent against the faraway mountain cliffs. Scattered Joshua trees in the distance looked like distracted soldiers standing at ease a comfortable distance from one another. They appeared ready to spring into action if something (or someone) should be so bold as to move even slightly in the blistering desert sand.

While resting my weight on my good leg, I tried to guess the time by looking at the sun. It was beginning to set in the northwest and I surmised it was roughly seven o’clock. In a few days, I pondered, it would be September.
I looked to the east and knew that beyond those rugged sandstone hills was civilization. I also knew the dry creek bed I was standing in could become a torrent of rushing water if the looming clouds forming overhead turned to rain. The deep, winding creek bed, I reasoned aloud, must eventually feed into La Madre Spring. If I could get there, I would be within ten miles of Rocky Gap. The trail to Rocky Gap was better, but it would be closer to fight the terrain and go over the top toward the turnoff to Keystone Thrust. From that intersection, I could follow a winding creek that leads to White Rock Spring. That would put me on the road to Calico Basin. If I could make Calico, I had a chance.

Again, my gaze completed the circle of the world about me. It was not a heartening spectacle. Everywhere was the silent sandstone skyline. There were low lying hills in some places and steep thrusts of majestic plateaus in others. Except for the Joshua trees and sagebrush, there were few noticeable signs of life. No trees, no shrubs and no grasses. The endless three hundred sixty degrees of desolation sent shivers up my spine and fear pierced deeply into my heart.

As desperation dawned on me, I cowered in the midst of the red, muddy clay as though the vastness of the land about me was pressing down with an overwhelming force in an ungodly attempt to crush me. I began to shake until I felt the cold sweat of despondency. My shaking caused the gun I was clutching to fall from my hand. It landed with a plop in the mud. The noise roused me from my trance and I pulled myself together. I leaned down and groped angrily in the bog until I recovered my weapon.

Summoning my waning energy, I hitched my backpack further toward my right shoulder to take a portion of its weight away from my injured left ankle. Slowly, while wincing with pain, I proceeded out of the bog toward the embankment. Even though my physical torture was almost unbearable, I did not allow myself to stop. Motivated by desperation, I dragged my bad leg up the slope to the crest of the hill over which Harvey had disappeared. My movements were grotesque, but I feared being swept away in a flash flood. Occasional distant flashes of lightening and rumbles of thunder reminded me that a rushing deluge in the rocky stream bed was not an impossibility.

Once I reached the crest of the small plateau, I saw a shallow valley that was void of life. Again, I fought my fear and overcame it. I stood erect and hitched the pack higher up on my right shoulder and lurched onward down the gradual slope toward the distant valley.

Although I was alone, I did not feel lost. I knew by paralleling the dry stream bed, I would eventually reach the hiking path that started at the crossroads to Keystone Thrust.

If I only had a rifle shell or two, I could shoot into the air and hope that someone would respond. If I had water, I could refresh my strength for the exhausting journey to Calico.

I hope you enjoyed reading the first two chapters of Red Rock Rendezvous. To continue reading please purchase the book.